The following is a list of representative survey projects completed: 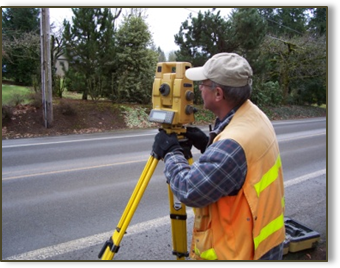 FDG provided a complete topographical survey of all the exterior improvements to the existing library building and provided base maps to the architect for future expansion design. Project involved right-of-way resolution to the adjacent ODOT US Highway 26.

Client: Mackenzie; Portland, OR
FDG prepared  site topographical survey in support of a new City police station that is to be constructed. FDG sub-contracted and provided our base maps with the architectural firm preparing the design.

Client: City of Woodburn, OR
In conjunction with a engineering design for multi-use pathway FDG provide topographical survey for the 1-mile corridor along the Mill Creek Greenway.

Client: Reed College
FDG completed  topographic survey on property owned by Reed College in Government Camp, OR. The client property had an encroachment by an adjoining property owner and the survey helped to resolve this.

Monday thru Friday
8am - 5pm